Previous / Next: Wedding of daughter Margery 1933

Transformation of the garden

The house at that time was mostly surrounded by fields (see picture opposite).

There were a few houses behind it on the upper road (what is now the old Carrickbrack road), but the gardens were not very developed (see the letter below from Betty L'Estrange, one of Sir John's daughters).

Sir - It was with great interest that I read in the weekend supplement of June 13th, "One man's way to achieve beauty without backache", written by Ella Shanahan. And I feasted on the beautiful picture.

It might be of some interest to keen gardeners to know that approximately 56 years ago my father, the late Sir John Lumsden, bought Earlscliffe from the late Dr Ella Webb. As this superbly sited place of seven acres was virtually shrubless and flowerless, my father set to, to landscape and transform the garden. He had many shrubs planted, not, unfortunately, as beautiful as Dr Robinson's present ones. He also planned several terraces, and in the centre of the main picture one can just glimpse one of the "points" of the St John Cross (my father being the founder and first commissioner of the St John Ambulance Brigade in the Republic of Ireland), the building of which gave my father enormous pleasure.

It was indeed God-sent, that such a skilled artist as Dr Robinson should have bought, nurtured and improved Earlscliffe's garden as he has, and I feel greatly indebted to him, as I greatly loved and appreciated the 18 years I lived there, up to my marriage in 1939. - Yours, etc.,

Betty was born Betty Florence Lumsden on 4 October 1909. Betty was a classical pianist and used to perform regularly in Dublin. [3] She married Captain Christopher Carleton L'Estrange on 21 October 1939. [4]

The picture below of the bride and groom was taken after her wedding, with Percy Phain, Bishop of Kilkenny and Rector of Christ Church, Leeson Park in the background. The picture was taken next to Sir John's aviary at Earlscliffe. Sir John was an avid collector of budgerigars and won many competitions with his collection. [5]

By the late 1930s Sir John had transformed the gardens at Earlscliffe with landscaped borders and many beautiful shrubs and flowers (see picture below).

Sir John also built a sundial in the shape of a Maltese Cross (the symbol of the St. John Ambulance Brigade). The sundial and the views across Dublin bay to the Wicklow Mountains can be seen below.

From what we can gather, Sir John enjoyed his 'retirement' years [6] at Earlscliffe, and hosted many social gatherings there. Some examples can be seen in the photos below. There are also a number of Lumsden family photos taken at Earlscliffe available in the following pages;  Photo set 1 and Photo set 2. 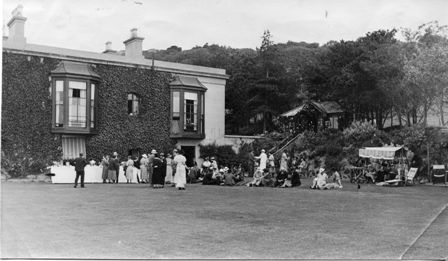 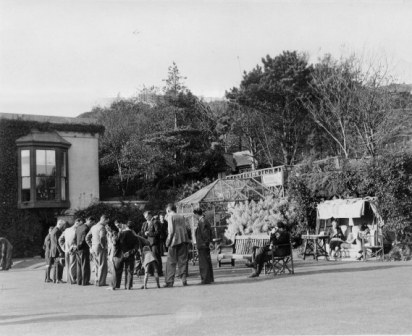 Also, we had a visit from Sir John Lumsden's grandson, John Radcliffe and his wife Sheila on Thursday 23rd April 2009. John had some great stories to tell of the Lumsden family and was interested to see some copies of photographs we have from a Lumsden family album which we believe might have come from Sir John's daughter, Betty L'Estrange (see Photo set 1 and Photo set 2).

Life at Earlscliffe in the 1930s

To learn more about life at Earlscliffe in the 1930s, see the photo pages below, plus read the stories from Margery L. Stratton, who stayed with her grandfather, Sir John Lumsden for a whole year in 1935-36:

Read more about the Earlscliffe House and Gardens:

To learn more about the history of the Robinson Garden at Earlscliffe, read the following page:

Disclaimer. Parts of the data found in these history pages has been derived from sources currently available on the internet. In researching the previous owners of Earlscliffe, certain assumptions have been made as to the validity of this internet data. If you believe that some of this data is inaccurate, please contact .